Sea Magazine's View on the Launch 38 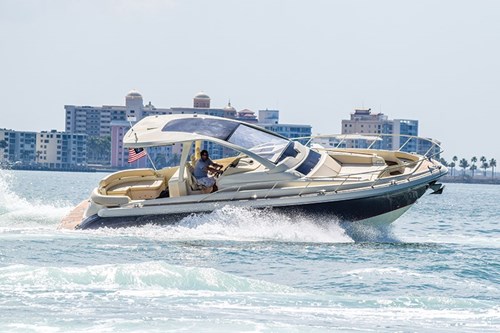 Sea Magazine's View on the Launch 38

One might expect to see (or not see) inboard or sterndrive engines on a 38-foot boat that’s 12 and a half feet on the beam, but outboards are becoming increasingly popular on boats in that size range, and even larger. And Chris-Craft wants its buyers to have options, so it offers I/O and outboard packages on its Launch 38.

Our test boat had the latter: three Yamaha F300s. They comprise but one of four outboard options. The others are twin 350s from Mercury and Yamaha, and a triple 300 package from Mercury. Twin Mercury V-8 8.2L 380 hp I/Os are standard, while twin 430s from Mercury and Volvo are optional, in addition to twin 380s, 370s and 400s from Volvo. The last two options are diesel. It’s obvious Chris-Craft wants buyers to be comfortable with their power choice.

While I wasn’t able to gather comprehensive numbers on our triple Yamaha F300 test boat due to a full complement of passengers aboard during a dealer meeting, those 900 horses of controlled fury — they aren’t nearly as loud as they used to be but still manage to emit a low, satisfying growl — pushed the 38-footer past 50 mph, very close to the 52 mph the Yamaha folks experienced when they gathered data for their Performance Bulletin. Given that, I’m going to use the Performance Bulletin numbers.

Making sure 10 people are holding on takes a minute, but once we were certain all passengers were ready, we cut the wheel hard and carved a nice, tight turn. The sportboat lean had us looking down into the water or up into the sky, depending on one’s positioning, and while the wake likely won’t accommodate surfing, both casual wakeboarding and skiing could be on the docket.

New and eye-catching is the Euro hardtop; its curved and stainless steel–framed windshield is severely swept back and its lines give the boat a sleek profile. A motorized SureShade extends from the aft end, but the structure doesn’t wrap around the sides, so plenty of breeze gets to the occupants of the triple captain’s chairs, which was much appreciated on a hot Florida day. (Redundant?) Those chairs front the center console, which is raised a step from the cockpit, to create clearance in the belowdecks sleeping space. A small section with cupholders and a tinted sunroof to below is to port, a sliding tinted-glass door to the cabin is in the center, and the helm occupies the starboard third.

Twin flush-mount Garmin GPSmap XSV multifunction displays occupy the sloped dash. Above them are engine gauges. On a small flat section to port (though I’ve seen it to starboard on other 38s) is the Optimus 360 joystick, which makes docking a breeze, and on sloped faces to either side of the wooden and stainless steering wheel are a stereo head unit and the engine throttles. Once the bow levels out on plane, the driver’s view all around is excellent. So is access to the bow. Sidedecks to either side, which are elevated two steps from the helm area, to create headroom in the cabin below, are easy to transit, and a safety rail runs from just aft of amidships to the bow.

Yes, the boat has lots of power. Yes, the helm has the latest electronics and a joystick. But at its heart, the Launch 38 is a big dayboat and entertainer, and the Euro hardtop (or any of the other hardtop options) enhances that activity, as it covers the helm and the forward half of the cockpit, which includes an outdoor galley unit. An optional power SureShade extends that coverage to the aft settee, when passengers want it.

The galley unit — built into the same console that serves as the base for the helm seats — is going to be the center of activity on the boat. Under an easy-to-lift gasassisted lid is a grill, a sink with a spigot and a two-burner cooktop. Built into the base of the unit are more make-the-day-last-longer amenities, including a refrigerator, an ice-maker and a microwave, each with its own access door.

Aft of the galley is a settee that is split into two halves by the walkthrough from the swim platform. A table rises up out of the deck at the push of a button and folds open to double its size. With room for two people in full lounging mode, four people in comfort mode or six people in cozy mode, the settees will comprise the main social zone on the boat. Unless it doesn’t. By that I mean some folks might prefer the bow, where a big sun lounge — easily room for three or four people — and a rear-facing bench settee create a comfortable and breezy conversation pit. An optional Bimini top and six cupholders enhance the comfort level on the bow.

Belowdecks is where the Launch 38, whose base outboard price starts north of $530,000, separates itself from many of its competitors. Down a set of teak steps is a split head — toilet and sink to starboard, shower stall to port — a queen berth forward, and two more berths aft, under the helm and galley area. A single berth is to starboard and opposite that is a full-size berth. Both include a reading light and a nightstand is between them.

The island berth in the bow is tucked into a cocoon of dark wood, white fiberglass and dark brown upholstered rails. An opening porthole at the head opens to the upright backrest of the sun lounge but can be covered to preserve darkness below. A TV occupies the starboard head’s bulkhead.

The Launch 38, the second-largest boat in the 142-year-old builder’s lineup, is built to do what Chris-Craft boats have always been built to do: safely and comfortably host a group of people — it’s rated for a 15-passenger capacity, and all of them will have a place for their rear end — for an enjoyable day on the water. Its outdoor galley unit makes it possible to keep everyone fed and hydrated, and an extendable SureShade aft and a Bimini on the bow ensure folks who want sun can get it and those who don’t can take cover. But it can do more than be a dayboat.

With a group of four or five people, this big dayboat/center console/bowrider/entertainer becomes a weekender (or longer) that can still do all of the other stuff. The outboard version takes advantage of the unoccupied engine space for lots of storage for coolers, toys, food and drinks. And given the Yamahas’ fuel efficiency, even at a cruise speed of 34 mph the boat’s range is more than 240 miles, so island-hopping is a definite possibility.