Chris-Craft Launch 38: Take Off in a New Direction 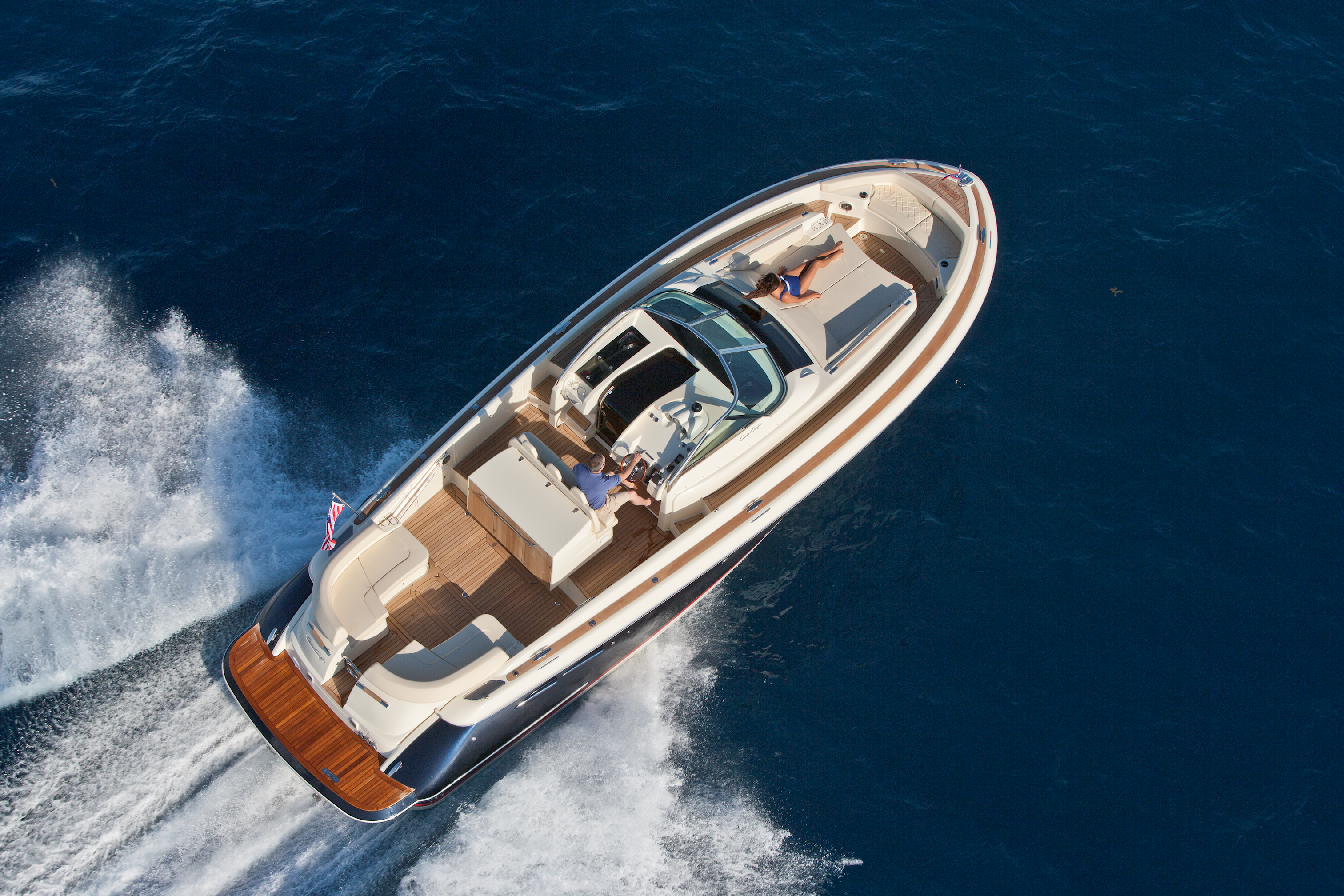 The Chris-Craft Launch 38 is one tempting morsel of molded fiberglass—looking at it is loving it.

There were just a few boats born in the past year—the Tiara 50 Coupe and the Sea Ray L650 spring to mind—which are just plain drop-dead gorgeous in the same way as the Chris-Craft Launch 38. This is the kind of gorgeous that people don’t argue over; they simply exclaim about it. Is it a 9.9, or is it the “Perfect 10”?

Okay, that much is open to discussion. And I say this as a guy who favors utility over beauty in boats. Still, one look at the Launch 38 and it’s hard to get over the wow-factor, even for a dedicated fan of function over form.

If boats were swimsuit models, the Chris-Craft Launch 38 would be featured on more than one calendar.

See what I mean? Yeah, I thought so. What’s really surprising, however, is that the Launch 38 isn’t merely a larger version of the other eye-candy boats in this model line-up. In fact, it’s a significant departure from the norm for a Chris-Craft launch. While the others are to one degree or another dual-console bowrider designs, the 38 is actually a form of cuddy-cabin boat. It has a cabin ringed by recessed side-decks, but the forward section of the cabin is low-profile, allowing Chris-Craft to utilize it as a bow cockpit. It’s more than a mere tanning pad, too, with full-sized sloping cushioned backrests, an aft-facing forward bench seat, cup-holders, and grab rails. That low profile of that cabin also allows the boats’ lines to naturally flow fore and aft, without an unsightly bubble-shaped top disturbing your eye’s pleasurable roaming.

The down-side to lowering the cabin’s profile is, of course, less room down below. But this doesn’t constitute much of a drawback, for two reasons: first off, this boat is a Launch, not a cruiser. It’s intended for day use, ostensibly for running back and forth to the mega-yacht you’ve anchored just outside of the marina. Secondly, the forward part of the cabin consists mostly of berth, where you really don’t need much headroom. And there’s plenty of full-height cabin left for the stand-up head, and the companionway. Which, by the way, leads you to a mid-cabin aft, with a set of twin berths. Why bother with sleeping arrangements in a boat of this nature? The better question is, with this much room belowdecks, why not? Besides, if you leave your yacht at the mouth of the harbor, run the Launch 38 in for some fine dining ashore, and then indulge in one too many Martinis at the Tiki bar, you won’t have to fold down a deck chair and sleep like a commoner.

A cabin on a mega-yacht tender? Why not? Chris-Craft proves the design can work, on the Launch 38.

Designing around a cuddy cabin doesn’t just change the boat’s forward arrangement, it also impacts the stern. Instead of the side lounges you’ll find on other models in this line, from the Launch 27 on up, there’s a U-shaped aft settee, facing a summer-kitchen built into the back of the leaning post. It constitutes a full galley, including an ice maker, a refrigerator, a microwave oven, a two-burner cook-top, a sink, and an electric grill. Whether you plan on flambéing lobster tails for an evening feast or merely chilling down the pâté and white wine at happy hour, it’s up to the chore.