Chris Craft on the Move 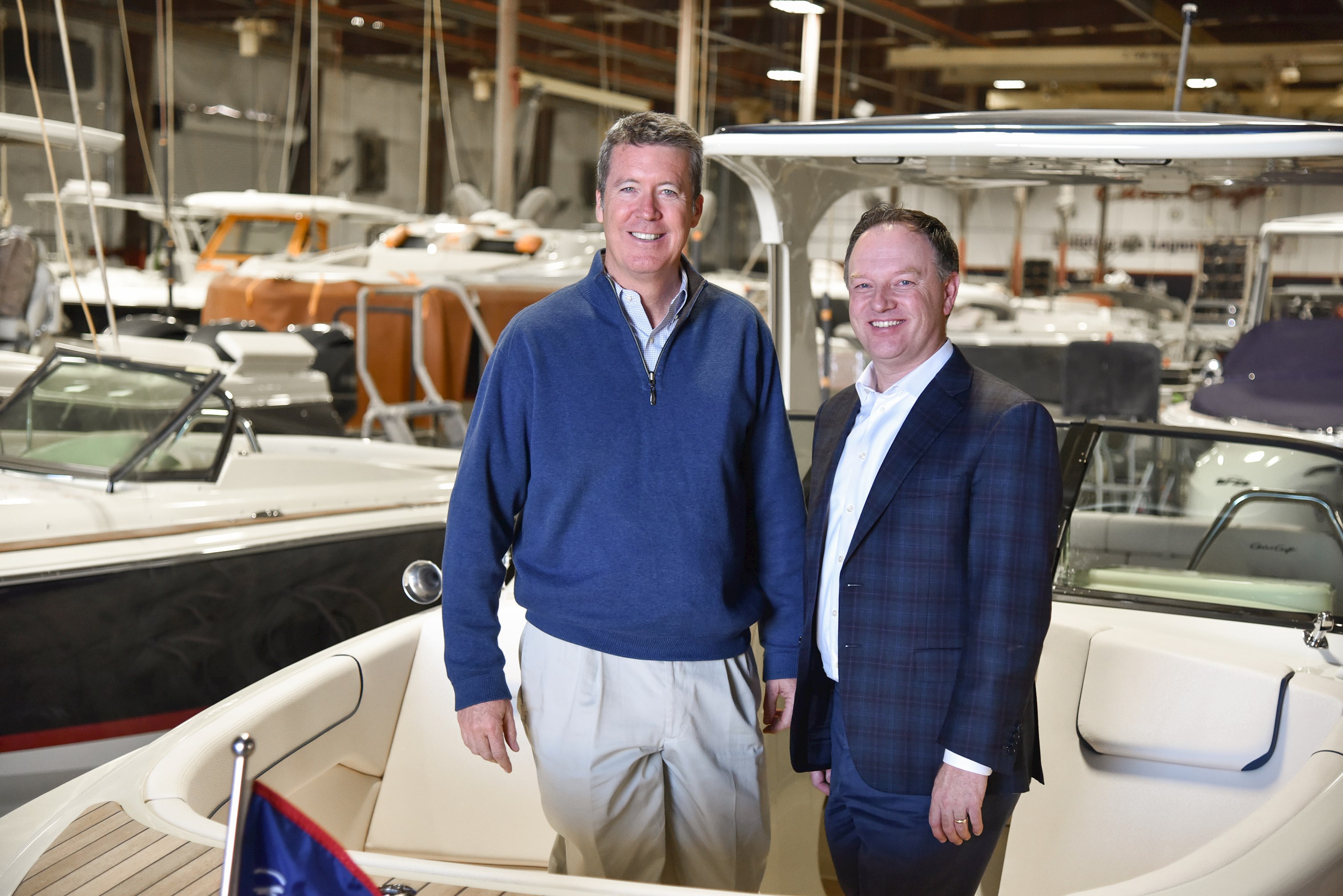 Steve Heese on the left and Mike Happe on the right.

The blueprint for increasing the number of boat models Chris-Craft offers, the size of its plant and its workforce are about the same as they were before the recreational vehicle manufacturer bought the boatmaker in June. In fact, those plans were part of the reason it was an attractive acquisition.

But the capital that the publicly traded Winnebago, with a market capitalization of nearly $1 billion, can supply to fuel Chris-Craft’s progress can make those plans happen much faster.

“It’s pretty much our same growth plan we had before the acquisition, but now we can execute it more quickly,” Chris-Craft president and CEO Stephen Heese said.

Plans under consideration include:

“There are parts of the market we don’t participate in and we’re going to be able to migrate into those,” Heese said. “Right now, we compete mainly above 25 feet and there’s a lot of market below 25 feet, so we don’t have to go very far down to pick up a lot of potential market.”

The company now produces 18 models on five production lines. It doesn’t plan to add lines but will be able to produce more models more quickly, he said.

Speed is important. The company as of late January had a four-month order backlog, marketing director Allison Scharnow said.

At first blush, a recreational vehicle manufacturer in Forest City, Iowa, buying a boatmaker in Sarasota, Florida, might not seem like an obvious combination.

So why did Winnebago acquire Chris-Craft?

Seven months later, the CEOs of both companies say the idea was inspired by thoughts of design and diversification.

But first, Chris-Craft, which had moved to Sarasota in 1990, had to become a company worth buying.

Saving the brand and the company

The Chris-Craft name had been famous for making boats for more than 100 years but the company had been closed for about nine months in 2001 when a London-based private-equity firm picked it out of the wreckage left by the bankruptcy of the Outboard Marine Corp. That company had bought Chris-Craft after it had declared bankruptcy in 1988 because of falling sales after years of squandering its reputation by selling generic boats.

Outboard Marine Corp. didn’t even own the rights to the name Chris-Craft. It was paying $500,000 a year plus 1 percent of sales for the right to use it. The company that owned the brand was Rupert Murdoch’s News Corp., a result of a decades-long move of the Chris-Craft name into television broadcasting.

Stellican Ltd., the London firm that bought Chris-Craft, paid News Corp. a reported $5 million to own the brand and $5 million for the company’s assets.

Stellican was founded by Stephen Julius and included Steve Heese, who had met Julius while they both attended Harvard Business School. The firm focused on rescuing neglected heritage brands and had already engineered a turnaround at the Italian luxury boatbuilder Riva, bought in 1998 and sold to Italian yacht company Ferretti Group in 2000.

Stellican and the Chris-Craft team scrapped the generic designs the company had been making and created watercraft that were high quality and unusual in their focus on nautical beauty. Their hulls are fiberglass, but nearly all of them include chrome fittings and decks or other parts made with yacht-worthy, hand-selected teak.

“They took a brand that could have gone either way if they hadn’t done a good job,” said Michael Verdon, the editor of the trade publication Soundings Trade Only Today who has been following the boating industry for 30 years.

“I have to hand it to them,” Verdon said. “There’s not a lot of people who come in with that imagination and sense of style.”

Verdon also credited Chris-Craft for its “very strong, quality-driven and design-driven” products that occupy a rare niche in the motorboat industry.

“Like any premium brand, they can charge a lot more,” he said. “Chris-Craft has been able to ride that wave of higher prices.”

It’s very difficult to compare prices of boats, even at similar lengths, because engines and other options vary widely. This is not unique to boats. Just think about comparing a Chevrolet with a Mercedes of similar size and number of seats. But its clear that a Chris-Craft is closer to the Mercedes on the price spectrum.

But a Corsair 34 Chris-Craft with a small cabin and outboard engines would run around $290,000 and a 34-foot Boston Whaler Conquest 345 with outboards lists at about $500,000, according to the companies’ websites.

At the Viage Group boat dealership at Sarasota’s Hidden Harbor Marina, which carries Chris-Craft, Scout and Beneteau powerboats, longtime dealer and managing partner Barry Marshall said the price difference actually is small. “If you compare options and what you get, it’s maybe a percent higher, if that.”

The difference, he said, is worth it, because Chris-Craft’s “appointments and the quality of materials are second to none.”

A combination by design

One of the goals the Winnebago board of directors gave Happe when he was brought in to lead the company in January 2016 after 20 years with the Toro Co. was diversification.

The Great Recession had cost Winnebago 85 percent of its revenue and, while its leadership had done well to keep the company afloat and independent, its board thought someone from the outside, as Happe was, could accelerate its recovery.

A survey commissioned at the time found that Winnebago was a leading legacy brand that was tired and needed to be refreshed to remain relevant to customers today and in the future, Happe said.

The CEO was asked to strengthen the company’s core and invest in towable trailers, to find ways to grow its profit and to diversify. “We looked for opportunities inside and outside the RV business,” Happe said.

Then Heese and company talked to Winnebago about an idea for a Chris-Craft-branded recreational vehicle with the quality design cues, craftsmanship and attention to detail the boatmaker was using in its products.

“Chris-Craft was interested in whether the RV industry could use a more refined approach to design,” Happe said, “and we were looking to expand our design approach as well.”

The two companies discussed opportunities and projects and developed trust. Happe said Winnebago officials also learned about Chris-Craft’s “growth plans and what they aspired to be, where they wanted to take their brand, and our team at Winnebago got excited about their vision and the way they did things, the way they treated their employees, the dealers, the way they took care of their customers.”

“So we started with this strategic, emotional marriage more than anything.”

Escaping a ‘sea of sameness’

There’s a term used in both the RV and marine business called ”‘the sea of sameness,’” Happe said. It means it’s often difficult to tell one brand’s recreational vehicle from another and one brand of boat from another.

One of the unusual ways Chris-Craft does this is to paint its hulls, rather than use the gel coat that covers the outside of nearly every fiberglass boat. The paint, five coats of it, allows the boats to come in a stunning variety of colors and with a five-year warranty against fading. They are the only production boatbuilder that paints their hulls, Heese said.

“It gives you premium performance because it doesn’t fade, but it gives you color options that there’s no other way to deliver,” he said.

Happe acknowledged that buying another maker of products that are just as expensive and unnecessary as recreational vehicles was not likely to insulate Winnebago from the shock of another recession. But he had a long list of ways the Chris-Craft deal would help.

The company, which does about 200 boat shows a year, has debuted new models at the Cannes Yachting Festival. Scharnow, the marketing director, said it showed four boats, including its new Launch 28 GT, last month at Boot Dusseldorf in Germany, billed as the biggest boat show in the world.

Although boatmakers are known to move factories — Chris-Craft had one in North Carolina in recent years that it sold, for instance — Winnebago is committed to keeping the company where it is, Happe said.

“Our commitment to Chris-Craft when we bought the company was that we wanted to support the workforce on the present campus and, so long as the Sarasota community and the team here can continue to keep up with the growth of the business, that we would look here first with investments to expand operations. Chris-Craft is a Sarasota business, so we’d like to expand as much as we can here,” Happe said.

“And we believe that we can,” Heese was quick to add.

Another industry that is known for being transitory is private equity. Yet Stellican has not flipped Chris-Craft, but instead stayed and carefully rebuilt it over the course of more than 17 years. When Winnebago bought the company, its full management team remained. The talent is a big part of the benefit of the purchase, Happe said.

Among those staying is a man who arrived with the private-equity firm. Asked why, Heese said it was because of “my excitement for the future of the company, my love of the business, my belief in Winnebago’s sincere interest to support the growth of the company here in Sarasota. My love of the people that I work with.”

The parent company seems to be on solid ground. In the past three years, Happe said, it has tripled sales, tripled its RV market share, added businesses like Chris-Craft to its portfolio and expanded its geographic footprint.

And it’s ready to help make sure Chris-Craft grows along with it.